The bagpipes have been played at funerals and other occasions to commerate and mourn the passing of a loved one, for centuries. Consequently, there are many funeral bagpipe tunes which are often played by a bagpiper at a funeral.

The following bagpipe funeral tunes are my suggestions only, based on my experience of being a Funeral Bagpiper, and what has helped given many people comfort in a difficult time, as well as giving their loved one the send-off they deserved. If you would like any other tune or song played which may have a special meaning to your family, please don’t hesitate to ask. 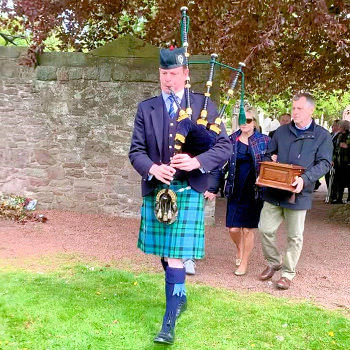 What does a bagpiper play at a funeral? 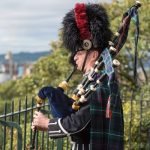 I’ve recorded some of the best bagpipe songs or tunes to play at a funeral. These range from sombre laments, to tunes which are more cheery to help you celebrate the life of your loved one. Popular Funeral Bagpipe songs include:

The Dark Island is a well-known slow air which is often requested. It is not too “sad”, and is nice to play for also celebrating somebody’s life.

Highland Cathedral is a very well known tune played on the bagpipes for all occasions, including funerals. I am often asked to play this.

I will return home to Kintail

I will return home to Kintail or by its Gaelic name, Cro Chinn t-Saile, is a very poignant slow air often played at Highland funerals.

The Flowers of the Forest

The Flowers of the Forest is an ancient melody dating back to the 16th century. It’s only played at funerals, particularly for the military and the Royal Family.

This is another old Gaelic song with a nice melody. It’s appropriate to be played for various points of a Funeral Service. It was even sung by Mark Knopfler of Dire Straits fame.

My Home is possibly a Northumbrian tune. It has a very nice melody and is not too sad. I’ve played this tune for various points of different funeral services.

The Fair Maid of Barra

The Fair Maid of Barra is another Gaelic Air with a haunting melody. I often play this at the funeral of somebody who has a connection to the Western Isles.

The South Uist Whaling Song has a simple but very beautiful melody. I also played this with my pipe band in the 2019 World Pipe Band Championships.

Erin’s Green Shore is an Irish song which I have played as a slow air in a pipe band. It has been sung by many Irish musicians and bands, including The Corrs.

I’m often asked to play Scotland the Brave as Reflection Music at the end of a funeral service. This is nice and upbeat and helps celebrate the life of the person who has passed away.

A Scottish Soldier is a very well known pipe tune and Scottish song. I play this as Reflection music after the funeral service, or as I play away from the Graveside.

This “retreat” pipe march is played by every bagpiper and every pipe band. I also play this at the end of a funeral service. It follows on nicely from A Scottish Soldier.

Back to Funeral Bagpiper