The 25th of January each year marks the anniversary of Scotland’s national bard, Robert Burns. On this day or close to it, sees the traditional Burns Supper held, in Scotland and in far-flung places where Scots emigrated to. An event celebrating the life and work of Robert Burns – combining haggis, whisky, poetry and of course, a Burns Supper bagpiper!

A bagpiper for Burns Night is traditional and has a most important role, and not only for piping.

What does a bagpiper for Burns Night do?

As a piper for Burns Night, I can perform at all the important parts of a Burns Supper. You won’t need a Toast Master as I can perform a theatrical recital of Burns’ Address to a Haggis. 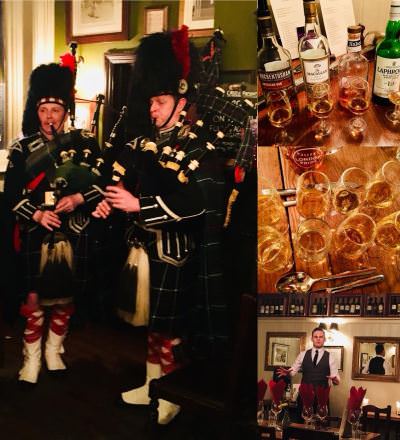 Piping for the arrival of your guests at the Burns Supper is traditional. It sets a Scottish tone to the evening and establishes the sense of cermony required for such an important occasion. Normally I’ll play outside at this time.

Piping in the Haggis

Piping in the Haggis is the beginning of the formal ceremony of the Address to the Haggis. This is where the star attraction of the Burns Supper arrives – the Haggis!

Playing the Burns song A Man’s a Man, For All That, I pipe in to the Dining Room leading the Chef carrying the Haggis on a platter. The Haggis is set down on a table in view of your guests, at which point I stop playing. Now it’s time to start the formal proceedings of the evening.

The history and life of the Haggis

Once the Haggis has been laid down and the Chef stands aside, I stop playing and welcome your guests to their Burns Supper.

Before formally Addressing the Haggis, I deliver to your Burns Supper guests a factual talk about the history, physical characteristics and habits of this mystical creature, the Haggi Tres Tripodes Creatura Inexpugnabilus (its Latin name which I will explain). You’ll learn how the Haggis survived the natural disasters which wiped out the dinasours, and of the risks today’s Haggis Hunters face to catch the Haggis about to be eaten.

The Address to a Haggis

The Address to a Haggis is the most important part of the official proceedings. Robert Burns is believed to have composed his verse, To a Haggis, spontaneously when asked to say Grace at a dinner in Edinburgh. It became tradition to recite this in front of a haggis when Burns Suppers in the bard’s honour began to be held in the early 19th century.

In the third verse of the ‘Address’ I draw my Piper’s Dirk and ceremoniously cut the haggis from end to end. Near the end of the Address I raise the Haggis on its platter and ask your guests to raise their glasses, and toast “To the Haggis”.

This is the signal for the main course of your Burns Supper dinner to begin. 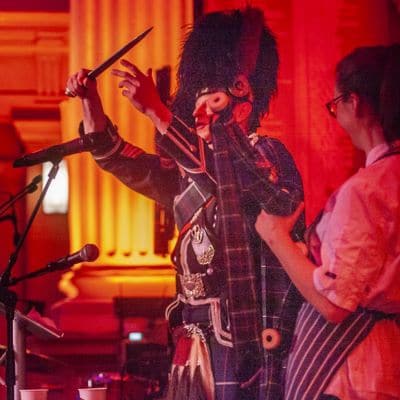 It’s bad news for the Haggis when the Piper’s Dirk is drawn!
book now

At a formal Burns Supper it’s traditional for the bagpiper to perform a short recital after the meal. This is a ten to fifteen minute performance where the the piper can show off his skills. A variety of tunes are played, from traditional ceremonial tunes, to lively contemporary tunes which will have your Burns Supper guests’ feet tapping.

When I finish playing, I thank your guests and any dignatories for their attention, bid farewell and pipe my way back out of the room.

The ‘Piper’s Dirk’ is a form of the traditional Scottish Dirk worn by pipers wearing the Full Highland Dress. Historically it was the Highlander’s personal side arm and was carried everywhere. Additionally the Dirk was used in ceremonial occasions as it represents the honour of a Highlander. Binding oaths were sworn upon the blade of the dirk, the steel of which was believed to be holy.

It is fitting that the haggis is cut by this blade.

Fair fa’ your honest, sonsie face,
Great chieftain o’ the pudding-race!
Aboon them a’ yet tak your place,
Painch, tripe, or thairm:
Weel are ye wordy o’a grace
As lang’s me arm?

Ye Pow’rs, wha mak mankind yer care,
And dish them out their bill o’ fare,
Auld Scotland wants nae skinking ware
That jaups in luggies;
But, if ye wish her gratefu’ prayer
Gie her a haggis!