What does a bagpiper wear?

I believe it’s most important that your bagpiper looks the part, as well as sounding it. My bagpiper uniform is the No.1 Full Highland Dress at most weddings and events. I will not wear any kilt wear and uniform accessories which are not of the finest quality. I am confident that there are very few pipers outwith the military who have such fine uniform and know how to wear it. If you see a better dressed bagpiper, please let me know!

I don’t charge any more to wear the Full Highland Dress, unlike many pipers who prefer to wear the far less spectacular Day Dress. 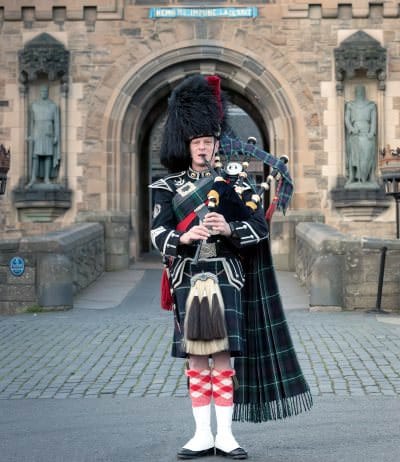 The piper’s “No.1 Full Highland Dress” was originally worn by pipers of the historic Highland regiments. “No.1s” were then adopted first by the Govan Police, and when pipe bands took off in the early 20th century, by numerous other police, colliery and civilian pipe bands. Indeed, the No.1 Full Highland Dress was worn by virtually all Scottish pipers and pipe bands until the 1980s when the Strathclyde Police Pipe Band adopted “Day Dress” as their bagpiper uniform due to the No.1 dress being so heavy, impractical, and not to mention very expensive to purchase and maintain. However, as practical as Day Dress is, it provides nowhere near the visual spectacle as a piper dressed smartly in No.1 Full Highland Dress. This is why bagpipers wearing No.1 dress are highly sought after to play at prestigious events.

I wear three No.1 Dress uniforms – My mother’s tartan, Ancient Mackay, the Mackenzie of Seaforth as worn by the Seaforth Highlanders and Highland Light Infantry regiments, and the Cameron of Loch Erracht originally worn by the Queens Own Cameron Highlanders.

My bagpiper uniform is the No.1 Full Highland Dress when performing as a Wedding Bagpiper, and at most other events. I do wear Day Dress when playing as a Funeral Piper though, where I feel it’s approriate to be a bit more understated. If you have a preference for a particular tartan, please do let me know. 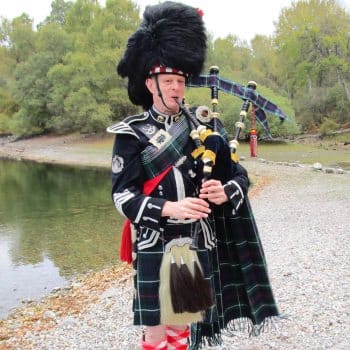 The military kilts I wear are army-issue and have “box pleats” at the rear, unlike my Mackay kilt which is “knife-pleated”. Military-weight kilts are very heavy, weighing in at 21 ounces per yard as opposed to 16 ounces for a regular heavy-weight kilt. My Cameron of Erracht kilt is an original Queens Own Cameron Highlanders kilt from prior to their 1961 amalgamation with the Seaforth Highlanders. 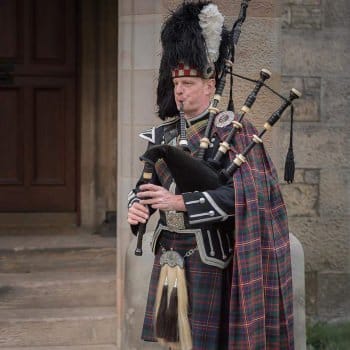 The rear of the kilt which is pleated, can be constructed and styled in a number different of ways, each of which produce markedly different effects despite being made from the same tartan. 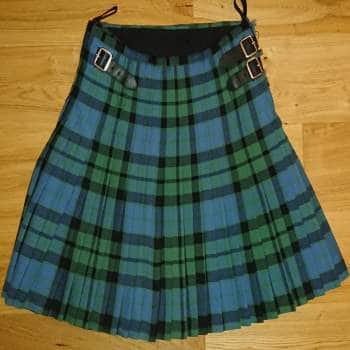 These two kilts are made from identical Ancient Mackay tartan, woven by the same tartan mill, Loch Carron. As you’ll see, the Pleated to Sett method of aligning the pleats results in the rear of the kilt having a similar appearance to that of the front apron of the kilt.

The Pleated to Stripe method, where the vertical black lines of the tartan show in each pleat, produces a darker effect with horizontal banding which contrasts to the front apron of the kilt. 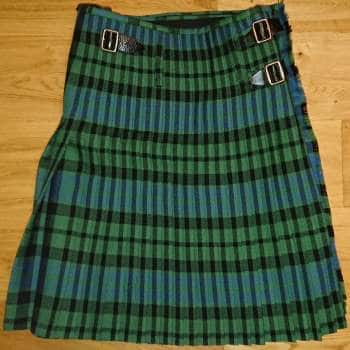 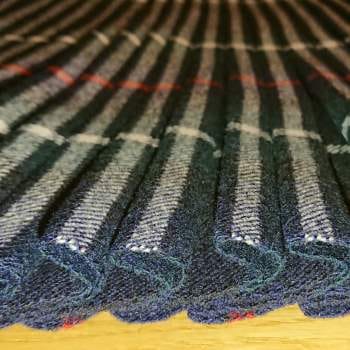 There are also different ways of constructing the pleats of a kilt. Here are examples of box pleated and knife pleated Mackenzie of Seaforth military kilts. Both are pleated to stripe. Box pleats can add to the body of the kilt and enhance the swing, but can be slightly harder to look after. They can lose shape, particularly if you’re not careful how you’re sitting. 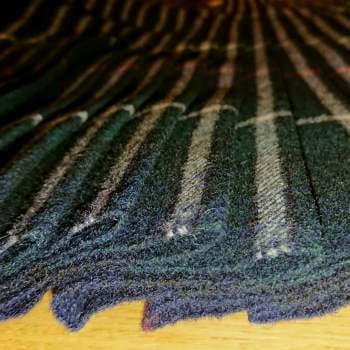 Whichever style is used, as you’ll see from this video, pleating a hand-made kilt takes a great deal of effort! 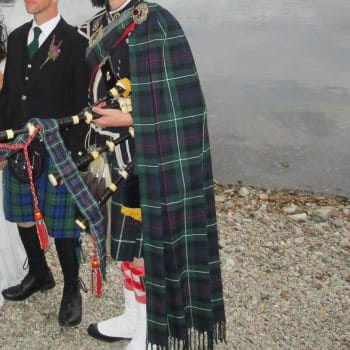 The Piper’s Plaid is modelled on the upper half of the “Féileadh-Mór” or “Great Kilt” which was worn by Highlanders until the early 18th century. The plaid is always the same tartan as that of the the kilt being worn. It is 3.5 or 4 yards long, wrapped tightly around the body, knotted and secured with a Plaid Brooch. This takes some skill to do properly, so the brooch sits proud and the plaid hangs in line with the spats. If not done correctly, the plaid can look a mess due to flattened pleats and a poorly tied knot. 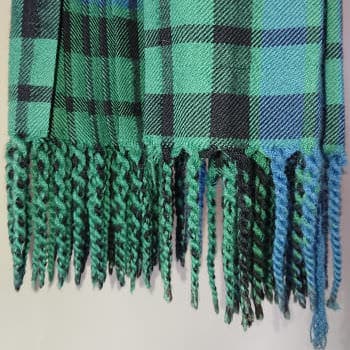 Purling – this is very difficult job. The 1.4m width of this plaid from Macdonald Kiltmakers, is spliced 60 times at each end and wound into the same number of “purls”, each coated in beeswax. 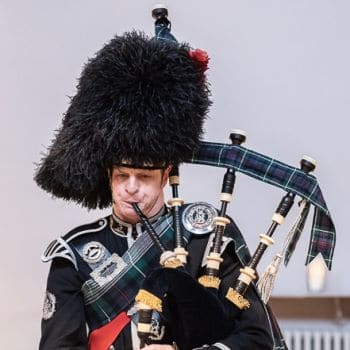 The Feather Bonnet, made from ostrich, was worn by Scottish infantry soldiers until the outbreak of World War 1. It’s now only worn by pipers and drummers wearing the Full Highland Dress. This one’s made by UK military supplier, The Feather Factory. When playing the Small Pipes during the Signing of the Register at a wedding, or when I’m “off-duty”, I may wear the traditional Glengarry Hat with an Eagle feather. 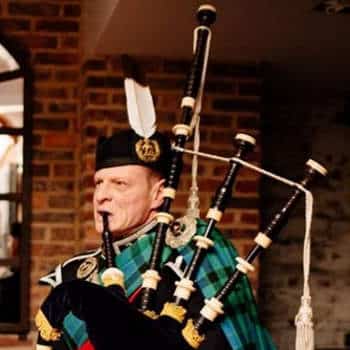 The quality of bagpiper uniform accessories worn is almost as important as that of the kilt, plaid and feather bonnet. There are many metal parts – belt buckles, the sporran cantle, the dirk, feather bonnet badge and the plaid brooch. They all contribute to the spectacle of the bagpiper wearing No.1 Dress. Good quality items are made from a white metal like nickel and look classy. Modern “stay-bright” buckles and brooches look like what they are – cheap and tacky. When I win the lottery I will go one step further and you will see me wearing sterling silver! Items such as the crossbelt, waistbelt and plaid brooch are not purely for decoration. They’re essential to keep the plaid in place. 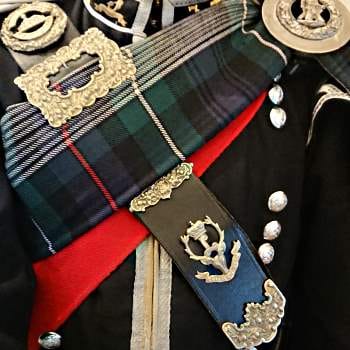 The diagonal “Crossbelt” can be worn underneath or over the plaid. Traditionally it was used to hang a sword from, which army Pipe Majors and Drum Majors are entitled to do. This one is from the Gordon Highlanders, but also features a 19th-century brooch of the Cameron Highlanders depicting the Sphinx of Egypt, and the Stag emblem with Gaelic motto “Cuidich ‘n Righ” (Aid the King) of the Seaforth Highlanders. 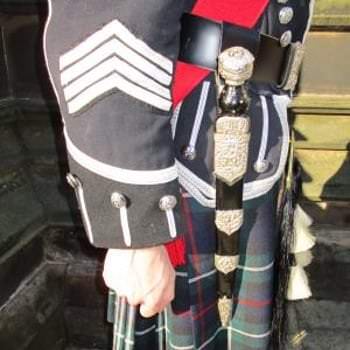 The ‘Piper’s Dirk’ is a form of the traditional Highland Dirk and is worn by pipers wearing the Full Highland Dress. Historically it was the Highlander’s personal side arm and was carried everywhere. Additionally the Dirk was used in ceremonial occasions as it represents the honour of a Highlander. Binding oaths were sworn upon the blade of the dirk, the steel of which was believed to be holy. 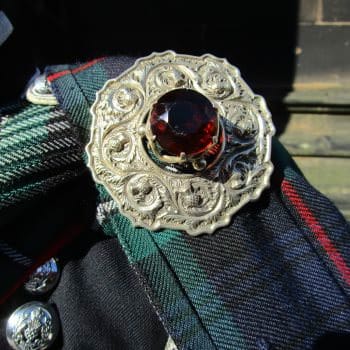 This Plaid Brooch is Victorian with a “Cairngorm Stone”. I am unsure if it is regimental. It does feature very similar thistle embossing as my Gordon Highlanders Crossbelt and Waistbelt and matches these nicely. 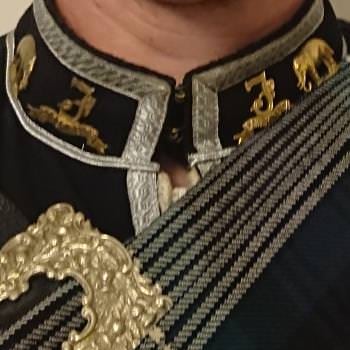 These are antique brass collar dogs of the Seaforth Highlanders, featuring the ‘F’ cypher of Commander-in-Chief Prince Frederick, Duke of York and Albany (brother of King George IV), and elephants commemorating the Battle of Assaye in 1803, in which the regiment fought. 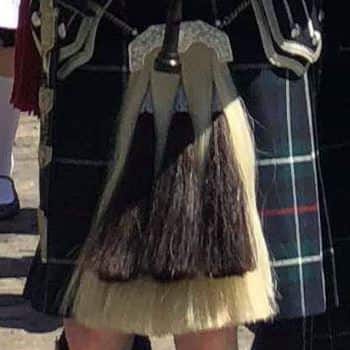 This is a horse hair Piper’s Sporran with three tassles and an ornate cantle. This is the hardest part of the piper’s uniform to clean as it requires complete disassembly and careful shampoo and conditioning. It was in Victorian times that the sporran became a decorative adornment to the Highland Outfit. However, the sporran was traditionally a leather pouch used to hold a day’s supply of oatmeal – the Highlander’s daily rations! 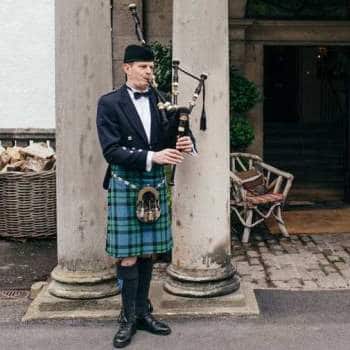 The Prince Charlie Outfit gets its name from the lower cut ‘Prince Charlie’ jacket and waistcoat which is worn with a wing-collar shirt and cufflinks.

This is the formal Evening Dress variant of the Highland Outfit. It’s typically worn by guests attending a formal Burns Supper, and is also a popular choice of dress by a Groom at his wedding.

I normally only wear this dress when I’m an invited guest to a wedding or event. 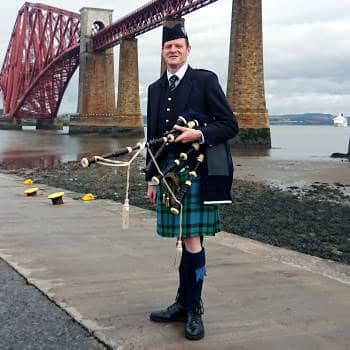 Day Dress is the style of Highland Outfit which is now worn by most pipers and Pipe Bands due to the Piper’s No.1 Full Highland Dress being so expensive.

I feel that most people, given the choice, want their piper to be dressed spectacularly in the Full Highland Dress, to add a greater sense of ceremony to your occasion. Therefore I very rarely wear Day Dress when piping at events.

I do wear Day Dress when piping at a funeral though, as I believe it more appropriate and understated than the No.1 Full Highland Dress.