Piper for Funeral – As much that a bagpiper plays in in times of celebration and joy, the bagpipes have for centuries been synonymous with times of mourning and remembrance. Having a bagpiper for a funeral is an ancient tradition in Scotland. As a piper for funerals in Edinburgh, I can help you mark the passing of a loved one by playing poignant music and celebratory music if desired, at appropriate points during the day of a funeral. If desired, I can dress in the ceremonial Piper’s No.1 Full Highland Dress, adding further dignity and respect to the service.

I’m a funeral piper for Burials, Cremations, and Scattering of Ashes cermonies, for all beliefs and denominations. 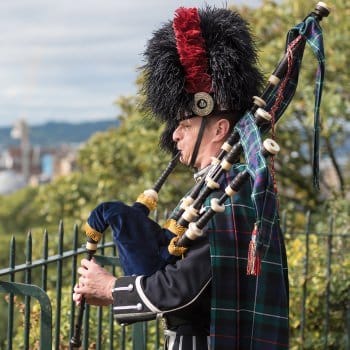 When does a piper play at at a Funeral?

A funeral of a loved one is a deeply personal occasion. I know from experience that arranging a funeral is a very difficult, and you may not know when a piper at a funeral should play. The service you have planned will be unique and will reflect the wishes of you and the departed loved one’s family. As a funeral piper I am here to compliment your plans.

This is often best discussed on the telephone or in-person, so I will contact you as soon as possible if you are looking a bagpiper for a funeral.

Here are some suggestions of appropriate times that piper for a funeral can play at:

Cortege at the Family Home

A bagpiper playing at the family home allows neighbours and friends who may not be able to attend the funeral, pay their respects, and it appropriately marks the beginning of the departed loved one’s final journey. I’ll start piping as the cortege enters the street and stops outside the home, and continue playing for a short while before making my way to the location of the funeral service.

Arrival of the Hearse

I will meet the hearse as it arrives at the venue of the funeral service, and proceed to play in front of the hearse and lead it to the door of the crematorium, church or chapel.

Pipe as the coffin's removed from the hearse

Here I will play as the coffin is removed from the hearse, and readied to be brought into the funeral service. I will stand outside the door piping as the coffin-bearers take the coffin and lay it to rest inside where the service is being held.

If required, I can play some music during the service. Here I play Scottish Small Pipes which are much more mellow and quieter than the Highland Bagpipes, and are entirely appropriate to be be played inside at a funeral.

Once the funeral service has concluded and those in attendance are making their way outside, I’ll play a short distance away while people are gathering and paying their final respects.

Bagpiper for Funeral – Scattering of Ashes

Having a piper play at a Scattering of Ashes cermony for a departed loved one, provides a tremendous send-off. I am always very honoured to play a part in such an occasion.

Such an occasion will obviously be entirely unique to you and your family, and may be performed at many entirely different types of location. Please get in touch to discuss your plans further. I would love to help you mark the occasion.

Jump to my Uniform Tour for more details.